There's a lot riding on empathy - leadership, customer trust and loyalty, successful collaborative teamwork... essentially, profits. This isn't some soft skill. This is a phenomenon that's at the beating heart of it all.

I struggled to write this blog this month. I re-read paragraphs I had written hoping they would turn into interesting nuggets that would make people want to Tweet them. I struggled because the importance of empathy in the workplace felt so obvious. Wasn’t it blatantly clear as to why empathy at work was so important and set to become even more important in the future? Isn’t everyone on-board with empathy already? Aren’t we all talking about it? Why did I pitch this to Claire?! Welcome to the head of a writer-researcher.

Google search data helped to confirm my suspicions. Empathy is so in vogue. Over the last decade more people have sought out information on the topic of empathy than before. Since 2008, there has been a steady climb in interest about this human phenomenon. 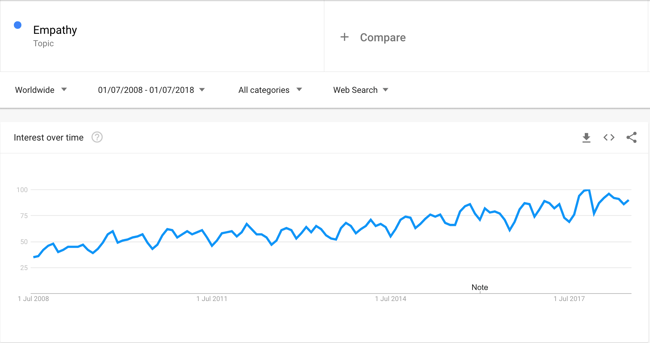 A lot of people are talking about empathy too. Using social listening tool Talkwalker, I found that there were an estimated 190K mentions of the word ‘empathy’ over the last seven days (18th – 24th July). To put that in context, over the same time period there were 1.9 million mentions of “Donald Trump”. That’s pretty good going for empathy against arguably the most talked about man on the planet.

However, not only are we seeking out more information about empathy and talking about it, but there are dotted lines being drawn to how we’re connecting this newly acquired knowledge to the world of work. According to the World Bank, in the United States alone, wellness programs are now a US$6 billion industry, with more than half of firms with at least 50 employees offering these programs. When you consider past attempts to build a wall between emotions and work these numbers look and feel like a revelation. If he were alive today, my stoic Italian grandfather would truly believe that the hippies have taken over.

However, scratch beneath the surface and it looks like most of these wellness programs are connected to physical health, not mental health. I then also came across a study that made me really pause. In 2014, Mind, a UK mental health charity, conducted a poll that showed that a staggering 95% of people who have had to take time off due to workplace stress did not feel able to give their employer the real reason. I know this is only a UK study, but look at that percentage. That’s HUGE.

In a world of increased group collaboration that is happening across cultures and time zones, empathy is essential for successful team work. It’s also crucial for leadership, something the world feels so devoid of right now.

In 1995, psychologist and New York Times journalist Daniel Goleman’s book Emotional Intelligence was published. Strange as it may seem today, it landed with an explosive bang. In the book Goleman takes the reader on a journey through what was then, a new and growing body of work that looked at the role and scope emotions play in intelligence. The book expanded on accepted notions of intelligence and put emotions at the center of how to live well. Can you just imagine the scandal? The messy world of emotions ruining the rational and neat belief system of intelligence! The question that drove Goleman’s work was, how can we bring intelligence to our emotions? In the years that followed that question evolved to include leadership and in 1998 Goleman turned his focus to the world of business, specifically looking at the connection between emotional intelligence and leadership. Goleman found the most effective leaders are alike in one essential way; they all have a high degree of emotional intelligence, which includes self-awareness, self-regulation, motivation, social skill and… drum roll please… empathy.

Empathy is also essential for successful product and service design, and ultimately, customer success. In my latest research paper It Speaks! the research team and I came across a term called sociotechnical blindness which essentially describes the disconnected relationship that technology has with humanity. We’ve become so focused on creating the best “end-user” experience that we fail to consider, let alone plan for, the system effects that take place when you change individual behaviour en masse. In an effort to personalise, we’ve somehow landed up dehumanising instead and have created this ugly tension between “users” and the narrative of addictive technology. What a paradox to be caught up in. I can go on in a similar vein when it comes to data. We proclaim we’re interested in the unique user experience however we bury our heads in our hands and lament when the data representing our audience isn’t big enough. We say we’re aware of bias and want to work on strategies to manage it, but we don’t have social scientists on our data science teams conducting ethnographies on the data that we’re then using in machine learning technologies. News flash, you cannot build empathetic technology by only connecting with your customers through a screen or a spreadsheet. That is not empathy.

Putting empathy into action is clearly not that obvious after all. Despite all the talking and the money we’re spending, we’re still dancing on the edges of emotional well-being at work and struggling to transform workplace cultures into spaces where public conversations, without the hangover of shame, can happen. Understanding how your colleagues are feeling and even fostering your own self-reflection to check-in with how you’re doing is difficult to do when you have your head in a screen, a deadline on your back and an upcoming meeting alert counting down the minutes like an ominous, computational time-bomb. Empathy cannot breathe in an environment like this let alone find a solid footing. We need to hit hard refresh on how we work if we are serious about putting all that talk into action. There’s a lot riding on empathy – leadership, customer trust and loyalty, successful collaborative teamwork… essentially, profits. This isn’t some soft skill. This is a phenomenon that’s at the beating heart of it all.

Last month we wrote about Empathy’s “cousin”, Active Listening. Read how this skill can make you a more empathetic human here.

Why Do So Many SaaS Companies Struggle with Churn?

High turnover and more sales might mask the effects of churn on the surface, but deep down there's an underlying problem with customer success.

The Importance of Design Thinking in an Automated World

Design thinking isn't just about logos, websites and all of the superficial elements of branding that make something look good.

The concept of a virtual environment isn't new, but with consumer VR becoming more prominent this year, what is the future of virtual reality?

Get notified on new future of work insights